Still the 5th day of Uktar 1375  Unsure of their next move, the Alliance stood their ground while waiting for their foes to take a swipe, confident in their ability to shrug off anything the undead could throw at them. Several rounds went by and it was apparent that neither side wanted to cross the threshold, so Rokh instructed Anee to dispel the fog clouds on their side of the wall.

Seth urged Keli and Rokh to head out and hunt down the spellcaster. His assumption was that this necromancer, unlike the shadowdancers, wasn't hiding, nor would it be inside a fog cloud since it needed direct line of sight to its targets. Rokh cast airwalk and Keli used a scroll of flight of the dragon to improve their mobility, then dimension doored out into the main cavern just 100 feet away and about 50 feet above the ground.

When they arrived, the two could see no wizard but there were 4 other areas obscured by fog clouds. They each chose a cloud and cast dispel magic on it, but nothing was inside either one. They did the same thing on the other two fog clouds the following round, but this time four dagger-like magic projectiles flew towards Keli from one of the clouds—all of them missed but it was still obvious that her invisibility was useless against this caster. And its fog cloud cover remained.

Before Keli could cast another spell, she was covered by a glowing gray haze, a Grimwald's graymantle spell, which would prevent her fast healing ability to kick in if she suffered any physical damage. Feeling vulnerable, she moved away and covered herself in a sphere of darkness, while Rokh moved in and successfully used a greater dispel magic spell on the remaining fog cloud.

With the necromancer out in the open, Keli cast disintegrate on it but the ray spell was deflected. Rokh closed in and swung his warhammer at the wizard, but the metallic weapon just passed through it. Annoyed, Keli cast greater dispel magic on it but it was counterspelled, which annoyed her even further.

Keli and Rokh knew that they had to take down the wizard's magical defenses first. They both cast greater dispel magic—one successfully penetrated its defenses and dispelled some of its ongoing protective spells. In a rare display of coordination, Rokh hammered away at the necromancer while Keli continually cast greater dispel magic, and their opponent could do nothing but use a counterspell move against the shade sorceress. There was no way that it could withstand the barrage. 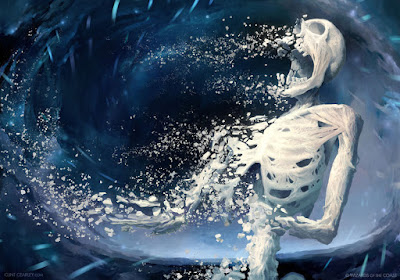 When their enemy finally fell, it revealed itself to be a lich—once a powerful wizard in life who chose to extend its longevity through undeath. Rokh poured liquid sun over its skeletal corpse to ensure that it wouldn't rise up anytime soon.

◄ Previous: The Twisted Rune Sends Its Regards
► Next: Hell Hath No Fury