Still the 5th day of Uktar 1375 The second vampire tried to escape, floating through the mass of black tentacles with ease in its gaseous form. Anee tried to slow it down with a holy word spell, but it proved to be too powerful even in its weakened state. Anya cast a tactical teleportation spell and in an instant she, Anee, Kiira and Steve the shadow flanked the vampire. Bolstered by Kendor's inspire greatness hymn and by her own divine power spell, Kiira defeated the undead shadowdancer before it could even transform back to its true form.

Rokh and Keli ported back into the small cavern to reunite with their friends, themselves fresh from their victory over the lich that led the undead raiding party. Reunited, the Alliance watched the two vampire mists struggle and finally dissipate into nothingness after a couple of hours of futilely attempting to find an exit.

Low on spells, the party decided to stay for another day in the Runestone Level to rethink their plans. This time, Keli, with the help of Anya and Anee, would stay behind in order to secure the area from further incursions by the Twisted Rune. Rokh would have to conduct his inquiry on Halaster's rescuers alone, after he and the rest of the party report their findings to King Gyudd.

They tore down the wall that separated the two caverns and ensured that the portal the Twisted Rune created was still blocked by a wall of stone. Everyone scouted the Runestone cavern thoroughly and found no further evidence of enemies that may still be in hiding. 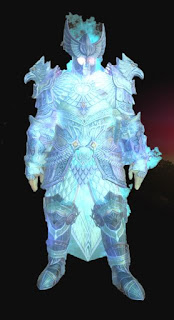 6th day of Uktar 1375 Rokh and Kiira made their usual preparations for their jump into the entrapped portal and Seth, Kendor and Steve the shadow hopped into the portable hole. Keli, Anya and Anee said their goodbyes as the two clerics made their saves and successfully activated the portal.

Rokh used the horned ring to teleport the party to the gates of Melairbode's Lost Level, eagerly anticipating the gifts that Fidelio the ghost had promised to leave them—the four swords, helmet and Grema's cauldron that he needed to concoct a potion that would lift his curse and end his miserable existence.

The items were there, along with a surprise—Fidelio himself. Apparently his efforts had failed even though he had followed Halaster's instructions to the letter, so now he was doomed to be a ghost forever (and he had even lost his ability to bring along others on his teleports). The party tried encourage him with their grand plan to reclaim Undermountain for the Melairkyn dwarves, and that with their help he would be able to find a new purpose. Fidelio agreed to tag along to meet the new lords of Undermountain. 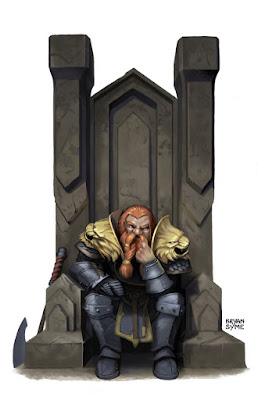 The group entered the halls of the Lost Level and requested an audience with King Gyudd and High Priest Bandaerl. They introduced Fidelio to the dwarves, who knew of the ghost's reputation as the apparition who teleported adventurers around Undermountain against their will. The Melairkyn agreed that Fidelio would indeed make an invaluable ally.

With the Fidelio business out of the way, the party discussed at length their findings and proposals to the King and the High Priest. They related everything about the Runestone—its discovery, the sheer amount of power it held, its significance to Halaster (and confirmation of the Mad Mage's death), how it could be used to eventually retake all of Undermountain, and the possible dangers it posed to everything around it. They proposed constructing a direct two-way portal to the Runestone Level, and having Bandaerl, Queen Keeley and Johanna Kherrispehril undergo training to operate the control panel. The King agreed to fund the 100,000-gp portal (which Rokh would create), but Bandaerl had to turn down being one of the Runestone's controllers since he, because of a covenant he made with his god Dumathoin, could never leave the sanctity of his temple. They also pointed out that Johanna, being a human of advanced age, would not be able to serve in this capacity for long. And finally, since this undertaking would put a heavy strain on their resources, Bandaerl asked if he could have Grema's cauldron so he could mass produce magic potions for the clan. The party wholeheartedly agreed to turn the cauldron over.

And after discussing the Runestone level's security concerns, Seth also proposed commencing diplomatic ties with Waterdeep. With Halaster gone, the city would without a doubt start panicking at the thought of monsters breaking out of Undermountain and wreaking havoc on the surface. And now that Clan Melairkyn has crowned a new king, it was the perfect time to negotiate a treaty with the Lords of Waterdeep, with sovereignty, trade and security being the primary concerns. Kiira and Kendor would be the clan's official representatives, but Seth volunteered to make the initial contact since he believed that discretion was paramount at this point, given the Twisted Rune's interest with the Runestone and their apparent involvement in Halaster's death. And with the dwarf lords' approval of their proposals, the party returned to the surface through the Yawning Portal tavern.

As part of his plan to start diplomatic negotiations with the City of Splendors on the dwarves' behalf, Seth decided to approach Durnan, the tavern's proprietor. Durnan was manning the bar when they arrived, so the tiefling wasted no time in asking him for a private conversation, on a matter of utmost importance that directly affected him and his business. Although Durnan hesitated at first, he agreed to meet with them after closing hours. Unbeknownst to the tavernkeeper, he had been chosen by the Alliance as the man who would once more determine the future of Undermountain. 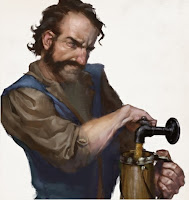 Realmslore Durnan the Wanderer was one of the first adventurers to delve into Undermountain, way back when there was no sprawling metropolis above it. With the treasures he acquired, he established the Yawning Portal tavern and built it around the well that granted access to the dungeon below (hence its name). He is respected by everyone in the city he helped create and is widely rumored to have the Lords' ears, if not being one of the Hidden Lords himself.


Seth, Rokh, Kiira and Kendor stayed at the Yawning Portal until it closed. Durnan asked them to help clean the place, to which they obliged. They sat down afterwards and the group told the tavernkeep of this outlandish story of a new level in Undermountain with an all-powerful artifact, Halaster's confirmed death, and the return of the rightful heirs to Undermountain who wished to establish diplomatic relations with the Lords of Waterdeep. Durnan questioned the party's wisdom in choosing him as the intermediary in these negotiations. They explained that as Undermountain's self-declared "gatekeeper", these events would affect him directly, so it was in his best interest to make sure that these talks go smoothly. Seth also expressed his desire to keep everything a secret for now, which is the reason why they did not approach Kyriani Agrivar or Laeral Silverhand-Arunsun, since that would mean the direct involvement of the Moonstars. Together, they would work behind the scenes to ensure that a treaty is drafted to guarantee the security of the region, both above-ground and below, and that they trust him to be a man of utmost discretion.

September 30, 2017 5th day of Uktar 1375 After several days, Anee had finally unlocked all of the Runestone’s properties. She learned that it acts like a capacitor for spells that are cast inside Undermountain. Its charges are used to power some of the magical enhancements of the dungeons, such as Halaster’s teleport cage and scrying cage spells (although this particular use seems to be a recent development).     Halaster was known for his specialty spells (e.g., scrying cage and teleport cage ) and he tied the Runestone to those spells in Undermountain. He was also known for his penchant for creating portals , and so he also tied the Runestone to access and modify all portals in his domain. The Mad Mage also used it to power the defenses of the Runestone Level—the elementals, the earth golem hybrid, and the flameskulls.     The group’s resident archivist also noted that its charges may eventually deplete if, for some reason, everyone in Undermountain stopped
Read more