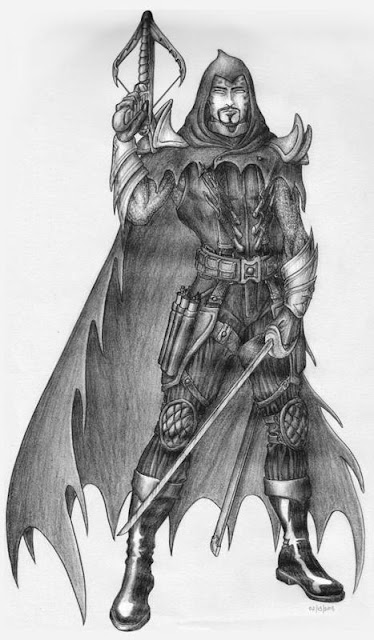 Seth was an orphan from the extraplanar city of Sigil. The wizard Mintassan the Magnificent (or Mintassan the Mad to his detractors) adopted Seth and brought him to Faerûn. He grew up in Mintassan's tavern in the city of Westgate called Blais House, a secret establishment that catered to planar travelers.

As a member of the Blais House staff, Seth's primary role was to spread false information about the nature of the tavern and to deter any of the clueless (i.e., material plane Faerûnians) who attempted to look for it. And when not engaging in skullduggery, he provided entertain-ment to its alien patrons with song, dance and a little companionship.

When Mintassan disappeared in the Year of the Banner (1368 DR), business steadily declined. Seth took to adventuring to support himself and his sister Anya (see below), and to augment the tavern's meager earnings that provide for the rest of the Blais House staff. He ended up in Waterdeep sometime in the spring of the Year of Wild Magic (1372 DR) at the behest of the Blackstaff, Khelben Arunsun, to deal with the increasing Sharran activity in the region. He has made the City of Splendors his home since then.

Behavior and Tactics Seth prefers parlaying over combat; if a potential opponent could be talked into cooperating or surrendering, he would use his Bluff and Diplomacy skills to end the encounter. When forced to fight, however, he employs hit-and-run tactics by using his hide in plain sight ability to disappear, and going in for a sneak attack (either melee or ranged) as soon as he’s done setting up his magical defenses. His shadow companion, Steve, can also set up flanking maneuvers for him.

Goals and Objectives Other than the acquisition of material possessions and establishing contacts, Seth has no real ambitions. However, he does recognize that information is an excellent commodity in the City of Splendors—one that powerful individuals and parties tend to covet more than gold—and he might just start an information brokering business when the time is right.

Fiendish Ancestry UltrolothMM3 yugoloth. Seth has blue-purplish skin that turns to almost black in some areas. His eyes lack pupils, but swirls of varying colors occasionally appear in times of anger, anxiety or excitement. Dark blotches run from his temples down to his neck. At the center of his forehead is a black circle that fades to a dark purple at the edges, marking him as a descendant of one of Shar’s daemonic servants.