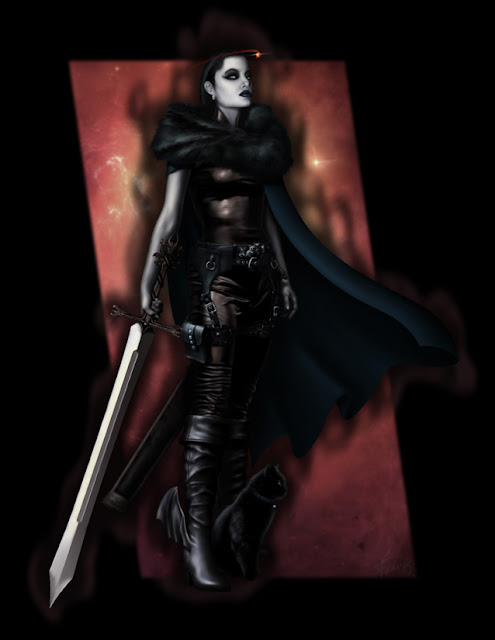 Still the 5th day of Uktar 1375 The second vampire tried to escape, floating through the mass of black tentacles with ease in its gaseous form. Anee tried to slow it down with a holy word spell, but it proved to be too powerful even in its weakened state. Anya cast a tactical teleportation spell and in an instant she, Anee, Kiira and Steve the shadow flanked the vampire. Bolstered by Kendor's inspire greatness hymn and by her own divine power spell, Kiira defeated the undead shadowdancer before it could even transform back to its true form.

Rokh and Keli ported back into the small cavern to reunite with their friends, themselves fresh from their victory over the lich that led the undead raiding party. Reunited, the Alliance watched the two vampire mists struggle and finally dissipate into nothingness after a couple of hours of futilely attempting to find an exit.

Low on spells, the party decided to stay for another day in the Runestone Level to rethink their plans. …
Read more

September 30, 2018
Still the 5th day of Uktar 1375 Through Anya's Rary's telepathic bond spell, Seth and Kiira were made aware that Rokh and Keli had engaged the lich in the main cavern. As soon as they battle outside had started, however, the two vampire monk/shadowdancer henchmen made their move as well.

One of the vampires' shadow companions took a swipe at Kiira. The touch attack was successful but the Strength drain was foiled by her armor's death ward effect. Seeing an opening, the vampires appeared out of thin air, flanking Kiira. Their touch drained 4 levels from the dwarf, then they sprang away in opposite directions.

But the cohorts were prepared for the vampires' surprise attack. Kendor started his chanting and used inspire greatness on Kiira, then moved adjacent to one of the vampires (let's call it vampire #1). Anya then used a benign transposition spell to exchange Kendor's and Kiira's places, which enabled the latter to launch a full attack …
Read more

September 9, 2018
Still the 5th day of Uktar 1375Unsure of their next move, the Alliance stood their ground while waiting for their foes to take a swipe, confident in their ability to shrug off anything the undead could throw at them. Several rounds went by and it was apparent that neither side wanted to cross the threshold, so Rokh instructed Anee to dispel the fog clouds on their side of the wall.
Seth urged Keli and Rokh to head out and hunt down the spellcaster. His assumption was that this necromancer, unlike the shadowdancers, wasn't hiding, nor would it be inside a fog cloud since it needed direct line of sight to its targets. Rokh cast airwalk and Keli used a scroll of flight of the dragon to improve their mobility, then dimension doored out into the main cavern just 100 feet away and about 50 feet above the ground.
When they arrived, the two could see no wizard but there were 4 other areas obscured by fog clouds. They each chose a cloud and cast dispel magic on it, but nothi…
Read more