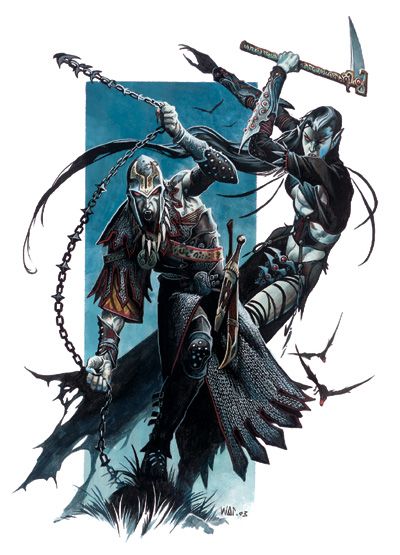 Still the 24th day of Marpenoth 1375 A reverse gravity spell sent Kiira, Rokh and Anee hurtling up into the air. While Rokh had an automatic feather fall spell to arrest his sudden ascent, the ladies suffered damage from both hitting the cavern ceiling and the subsequent round-trip down to the floor.

Still unsure if the reverse gravity was cast by an unseen assailant or merely one of Halaster's traps, the divine trio collected themselves and walked a short distance down the footpath. They called on the others to regroup. But before they could even discuss what had just happened on the hilltop, a horrid wilting spell enveloped them; Kendor and Anya took a massive amount of damage and barely survived the necromantic attack. An enemy had definitely entered the cavern, they now realize, and it had gotten the drop on them twice.

Seth used his cloak of the bat to polymorph into a tiny bat and flew northward, hoping to spot the enemy caster. Just then Kendor and Keli, who were at the rear of the line, spotted a spectral hand heading their way. Keli, who was invisible (as always), used a scroll of flight of the dragon and flew 100 feet in the direction where the hand came from. The shade saw three hooded figures standing in triangle formation, about 20 feet from each other.

Keli, however, was not doing too good herself. The enemy could see her despite her invisibility and one of them promptly cast avasculate on her, stunning the shade and, unable to flap her magical wings, dropping her to the floor. Then a skull-shaped cloud of gray energy enveloped her—the sure sign of a Grimwald's graymantle spell, which rendered Keli's innate ability to heal inoperative. Assuming that the other two figures were merely mirror images, she cast firebrand on all of them, but it seemed to have no effect. Fortunately, Kiira had arrived at her position and Keli was able to shadow-stride away to the far side of the hill.

Meanwhile, back on the hillside, the cohorts buffed themselves up with spells while inside the resilient sphere. Seth returned and joined them inside using his shadow jump ability without dismissing his bat form. Suddenly, two hooded figures materialized inside the sphere with them. Kendor attempted to get rid of one of them with a g'elsewhere chant spell but he/she/it held on. Anya panicked and teleported the group to the other side of the hill with a tactical teleportation spell.

Rokh had dimension doored to Kiira's location just as the dwarf was attacking the necromancer. The aasimar's true seeing spell revealed that the other two figures were just silent images (left behind by the ones who tried to attack inside the resilient sphere). However, Kiira's attack also proved ineffective against the spellcaster, who was protected by an ironguard spell and made the dwarf's metal axe seem insubstantial as it hit his/her/its body. Rather than engage the enemy in melee, Rokh decided to cast destruction instead. However, the necromancer unexpectedly survived the supposedly fatal magical attack and escaped through the floor by means of a ghostform spell.

Featured Image: vampires from D&D 3.5e Monster Manual by Wizards of the Coast

◄ Previous: Activating the Runestone
► Next: The Search for the Breach