Still the 2nd day of Marpenoth 1375 The company came back to the drow temple ready to charge in, only to find its door walled up. They tried to use Keli's shadow travel ability, but the place was warded against teleportation. So the sorceress used a disintegrate spell to make her own doorway, and the group flew inside the large cavern within a sphere of invisibility from Anya. Keli, the only one still visible, stayed behind.

Several Lolth-theme statues filled the central and rear areas of the temple, dimly lit with faerie fire. As the company neared the rear, a drow priestess appeared from behind one of the statues and cast invisibility purge on them. Kiira charged the dark elf but she spider walked up to the web-filled ceiling after taking a hit. Rokh then cast firestorm on her, but she and every defender of the temple were protected from fire. Only the webs burned and down fell several monstrous spiders, with some landing on our heroes.

Rokh and Kiira pursued the priestess, Seth went into stealth mode and scouted for more hidden opponents, Keli flew in and dispelled the forbiddance spell that prevented teleportation, and Anya cast Otiluke's resilient sphere to protect herself and her fellow squishy cohorts.

The drow priestess called in a trio of drow soldiers to defend her, but Rokh killed them all with a heat drain spell. Seth found four minor priestesses hiding behind statues and killed one; Kiira killed two with one swipe of her axe each, and Anee captured one with a sarcophagus of stone. Confident that all the leaders of the drow band were dead (and one held), Seth called for the cessation of hostilities to the presumably still-staying-out-of-sight drow warriors, and told them to leave and never come back.

Rokh opened the sarcophagus of stone at the chest level with a stoneshape spell, then Anya cast probe thoughts. The priestess revealed the following information:


Anya polymorphed the drow priestess into a tiny spider, released her, and the party then proceeded to the room where the portal was. She cast an analyze portal spell on it and saw that the other side of the portal was covered in bright light. Suddenly, the ghostly Fidelio appeared to them once more.

Fidelio needed the party to retrieve a helmet for him, and without further explanation he teleported them to a cavern with a small opening. The tunnel was big enough only for them to crawl through, so Seth sent his shadows to find an area that would be high enough for them to stand upright.

After crawling for about an hour through winding tunnels, the party reached a small cavern. In it was the desiccated husk of a giant queen ant and a few of her maids. Seth searched around and found some footprints of a bare-footed humanoid, a shovel, and a recently-dug patch of earth. Buried about a foot deep was a small chest that contained about 5,000 gold pieces worth of various coins. Anya cast commune with earth and felt the presence of another creature approaching. 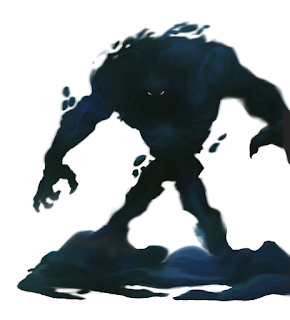 Through one of the cavern walls appeared a greater shadow, wearing some kind of helmet, and it was angry (probably because the treasure was his and we dug it out). Kiira got in one strike of her spiritual weapon, and Rokh pursued it while ethereal and hastened. Eventually the aasimar cleric defeated it and retrieved its magic helm. The group crawled back to their starting point and Fidelio teleported them back to the portal room.

This time, Fidelio was more amiable to the party and he answered their questions. As the story goes, he was once a Paladin of Tyr who boasted that he had defeated a monster by himself; but the truth was, he was almost killed if not for Tyr's intercession. For his hubris, Tyr turned him into a curst, a type of undead creature, who tested braggarts in Undermountain. Halaster twisted his curse and turned him into a unique form of incorporeal undead, which had slowly driven him mad. But his sanity gradually returned when the Mad Mage perished, and he was able to find Halaster's notes in the Runestone Level that revealed how he could break his curse—thus the need for the three items he sent the party to retrieve.

Halaster was indeed very dead, according to Fidelio. He was killed while casting a powerful spell that was interrupted by someone or something while doing his research in the Runestone Level. Fidelio could not help the party go further; however, he did reveal that the light on the other side of the portal was a stasis spell, and the party should first find a way to get past this trap before going in. And after much convincing, he agreed to leave a note where he would leave his quest items (the swords, the cauldron and the helm) for the group. He then disappeared to perform the rituals that would break his curse.

Featured Image from: Tyrants of the Underdark board game by Wizards of the Coast
Image Credit: greater shadow from Pathfinder RPG by Paizo

◄ Previous: Down the Shaft
► Next: Into the Runestone Level