February 25, 2019 Still the 5th day of Uktar 1375 The second vampire tried to escape, floating through the mass of black tentacles with ease in its gaseous form. Anee tried to slow it down with a holy word spell, but it proved to be too powerful even in its weakened state. Anya cast a tactical teleportation spell and in an instant she, Anee, Kiira and Steve the shadow flanked the vampire. Bolstered by Kendor's inspire greatness hymn and by her own divine power spell, Kiira defeated the undead shadowdancer before it could even transform back to its true form. Rokh and Keli ported back into the small cavern to reunite with their friends, themselves fresh from their victory over the lich that led the undead raiding party. Reunited, the Alliance watched the two vampire mists struggle and finally dissipate into nothingness after a couple of hours of futilely attempting to find an exit. Low on spells, the party decided to stay for another day in the Runestone Level t
Post a Comment
Read more

September 30, 2018 Still the 5th day of Uktar 1375  Through Anya's  Rary's telepathic bond  spell, Seth and Kiira were made aware that Rokh and Keli had engaged the lich in the main cavern. As soon as they battle outside had started, however, the two vampire monk/shadowdancer henchmen made their move as well.      One of the vampires' shadow companions took a swipe at Kiira. The touch attack was successful but the Strength drain was foiled by her armor's death ward effect. Seeing an opening, the vampires appeared out of thin air, flanking Kiira. Their touch drained 4 levels from the dwarf, then they sprang away in opposite directions.      But the cohorts were prepared for the vampires' surprise attack. Kendor started his chanting and used inspire greatness on Kiira, then moved adjacent to one of the vampires (let's call it vampire #1). Anya then used a benign transposition spell to exchange Kendor's and Kiira's places, which enabled the l
Post a Comment
Read more

September 9, 2018 Still the 5th day of Uktar 1375   Unsure of their next move, the Alliance stood their ground while waiting for their foes to take a swipe, confident in their ability to shrug off anything the undead could throw at them. Several rounds went by and it was apparent that neither side wanted to cross the threshold, so Rokh instructed Anee to dispel the fog clouds on their side of the wall.      Seth urged Keli and Rokh to head out and hunt down the spellcaster. His assumption was that this necromancer, unlike the shadowdancers, wasn't hiding, nor would it be inside a fog cloud since it needed direct line of sight to its targets. Rokh cast airwalk and Keli used a scroll of flight of the dragon to improve their mobility, then dimension door ed out into the main cavern just 100 feet away and about 50 feet above the ground.      When they arrived, the two could see no wizard but there were 4 other areas obscured by fog clouds . They each c
Post a Comment
Read more

October 8, 2017 Still the 5th day of Uktar 1375 Both vampires missed with their grapple attempts, but in her weakened state Kiira decided to withdraw and join her friends on the other side. She cast freedom of movement , turned around, and bolted for the portal . Both attacks of opportunity from the undead monks had missed, but, unfortunately for the warrior-priestess, she had triggered the traps that Halaster had set.      Kiira was instantly feeblemind ed and levitate d 10 feet off the ground [rolled a natural 1 twice], but she was able to make her save against the temporal stasis . With only her survival instincts to rely upon, Kiira used what little intellect she had left to make her Bigby's grasping hand grapple herself and have it push her through the portal .      At this point Rokh was already making preparations to go back and rescue Kiira, so he was quite relieved when the dwarf showed up, albeit with a blank stare. He cast heal and used a scr
Post a Comment
Read more

September 30, 2017 5th day of Uktar 1375 After several days, Anee had finally unlocked all of the Runestone’s properties. She learned that it acts like a capacitor for spells that are cast inside Undermountain. Its charges are used to power some of the magical enhancements of the dungeons, such as Halaster’s teleport cage and scrying cage spells (although this particular use seems to be a recent development).     Halaster was known for his specialty spells (e.g., scrying cage and teleport cage ) and he tied the Runestone to those spells in Undermountain. He was also known for his penchant for creating portals , and so he also tied the Runestone to access and modify all portals in his domain. The Mad Mage also used it to power the defenses of the Runestone Level—the elementals, the earth golem hybrid, and the flameskulls.     The group’s resident archivist also noted that its charges may eventually deplete if, for some reason, everyone in Undermountain stopped
Post a Comment
Read more

The Search for the Breach 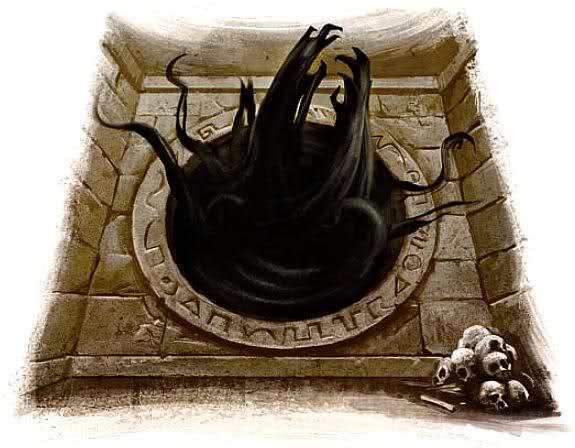 September 24, 2017 Still the 24th day of Marpenoth 1375 Seth and Keli tried to locate the other two attackers (whom they now assume to be shadowdancers) by stalking the cavern floor, to no avail. They also tried to look for the portal that the necromancer and the shadowdancers could have used to breach into the Runestone level, but there were no obvious signs of any such magical doorways.     Next, the whole party regrouped and followed Seth while he attempted to find the shadowdancers’ tracks, and again they were disappointed. And another attempt was made to look for the suspected portal by sweeping the whole cavern with multiple detect magic spells, and still nothing. They even considered summoning an umber hulk for its tremorsense ability, but its movement rate was too slow for it to function as an effective hunter.     In what alcoholics would call a moment of clarity, Rokh decided to use his prepared miracle spell to cast lesser planar ally to summ
Post a Comment
Read more
More posts