1st day of Marpenoth 1375 The company went back to Undermountain. They spoke again with Errya Eltorchul to share information about the encounter at the Citadel of the Bloody Hand, then proceeded to the Pyramid Room to check on its defenses.

The party spoke with King Gyudd and realized that logistics were becoming a problem for the Melairkyn dwarves. They proposed establishing a partnership with the gnomes of Spiderhaven for goods (to which the gnomes later agreed to), but finding a method of transporting the merchandise would have to wait until the current quest is finished. 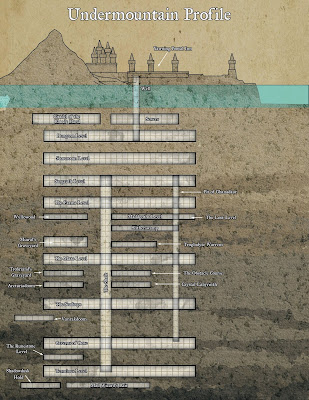 Continuing on with their mission to find Halaster, Kiira led the party to The Shaft—the pit that led directly to the lowest levels of Undermountain. Using Keli's overland flight spell, they flew down to the bottom of the Shaft and followed an underground river upstream. They encountered a pair of minotaur fishermen who confirmed that an elderly human male used to pass though their level, but would not reveal more information without their leader's presence. The party waited 6 hours before the minotaur chieftain appeared, but he was willing to reveal everything they knew about the old man in exchange for 1,000 gold pieces, the complete elimination of their drow enemies, and for them to be left alone in their level afterward. The party agreed, of course (Rokh and Keli paid the gold), and followed the chieftain's directions to where the old man frequently disappears to, which was coincidentally where the drow had set up an encampment.

The party came across a cavern full of crystals. Seth pried one out of the rocks and saw an image inside. Keli did the same and saw a fragment of Halaster's vision in it. Seth gave his piece to Anya and she saw another vision-image in the fragment. They went on their way but, after a few paces, Kendor suddenly disappeared. Anee determined that it was some kind of teleportation effect, and confusion was also active in the area. Anya cast commune with earth and saw that Kendor was back in the crystal cavern. The party found Kendor in a state of confusion, and could not walk out without the teleport trap affecting him again. Rokh decided to use dimension door to bring him out of the area.

The group walked past a fungus farm with rothé grazing and eventually reached the border of the minotaur territory where two guards stood... guard. The minotaur guards knew very little of the area beyond, except that the drow occupied a large network of winding tunnels. The party went on their merry way when suddenly a ghostly figure appeared. 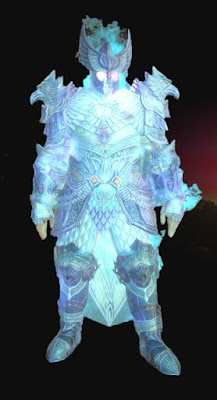 The apparition introduced himself as Fidelio. He wore a battered suit of armor with a hole in the chest—where a holy symbol or insignia might have been. He said that he "used to test braggarts" and that he had need of us (presumably to put his soul to rest). Without the party's consent, Fidelio transported them to an unfamiliar hallway and told them to retrieve the swords held by some helmed horrors in a nearby room. He refused to answer any questions and just disappeared.

Inside the small circular room were four helmed horrors, seemingly guarding a small pool of water on top of an elevated platform. Rokh entered the room and fought the closest horrors, and Kiira attacked the farthest ones by hopping on Kendor's dimension door. But after a few rounds, when there was only one left, the pool began to bubble and an elder water elemental burst out. It shoved Rokh out of the way, attempting to escape into the hallway. Anya cast a wall of stone to trap it inside the room and the two clerics were able to kill it with little effort, and retrieved the helmed horrors' swords. Just as soon as the party was reunited, they were whisked away by Fidelio back to the minotaur guardpost, sans swords.

2nd day of Marpenoth 1375 The party continued their quest and sought drow outposts to attack. Kiira and Rokh went on full beast mode and slew every drow that they could find. In one cavern, however, a group of drow held some 50 goblins hostage. Seth convinced them to just get the eff out, and the group let them leave without bloodshed and also left the goblins to their own devices.

As they approached an area which could be described as a temple, once again Fidelio appeared. This time he wanted the party to retrieve a cauldron from a covey of hags and their ogre and giant bodyguards who lived in a small island. Like a bunch of roofied girls at a frat party, the Alliance was once again carried off against their will, this time on the shore of an underground lake.

The party used dimension door to hop onto the island. Once there, Seth scouted ahead to look for their targets. He found two orcs guarding a cave entrance, and told Rokh and Kiira that they could easily take out two orcs with a frontal assault. The clerics attacked and, to their surprise, the orc guards were tougher than usual. When Rokh felled one, its corpse turned into a hill giant's, so he activated his true seeing ability to prevent any more surprises. 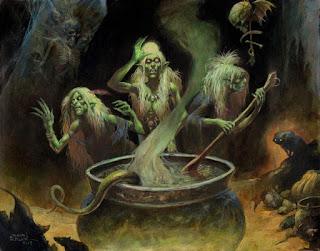 Eight ogres came rushing out of the cave. Most of them surrounded the squishier targets, Anee and Kendor, and both were hit. The archivist was able to dimension door out of the melee but the bard took a beating before Keli was able to firebrand the ogres to ashes. And just as Rokh and Kiira were cleaning up, a trio of annis hags (disguised as ogres) put the dwarf cleric in a forcecage and attacked, once again, the squishy cohorts. Anya used tactical teleportation to put the two favorite targets securely within the forcecage and placed Kiira in melee distance of two of the hags. Kiira had little trouble hacking her opponents to death, while the third hag was fingered to death by Keli's finger of death.

The group found the cauldron that Fidelio was seeking inside the cave, which was then being used by the monsters to cook humanoid stew. They emptied the cauldron of its gruesome contents and cast analyze dweomer. The big cooking pot was called Grema's cauldron (Grema was apparently one of the annis hags), and it gave its user the ability to brew magic potions as if he or she had the Brew Potion feat, or halve the brewing time if he/she already had it. The cauldron was certainly a neat item to have, but Fidelio suddenly returned them to the same spot from where he took them and kept the pot for himself.


◄ Previous: Pursuing the Visions
► Next: The Drow of Kyorlamshin