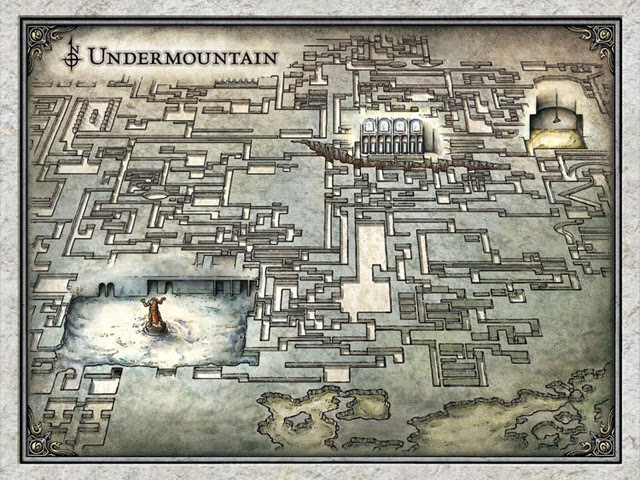 This recap also includes the events of the short session we had in May.

30th of Eleint 1375 [continued] The group climbed up to the first level of Undermountain hoping to find parties that might have some knowledge or news of the recent events. In one corridor on the northern side, they encountered a mercenary group that had staked a claim on the area and charged a toll for passage. Not wanting to pay up (on principle), they made short work of the mercs but one, who revealed that they were employed by Errya Eltorchul, an exiled noblewoman from Waterdeep.

The party released the survivor and went down the corridor where he fled. They found a large chamber with pillars, guarded by more mercenaries but were cordial enough to accept a parlay. After a few minutes, Errya Eltorchul herself appeared and was willing to negotiate. The party offered to spearhead the exploration of Undermountain vis-a-vis Halaster's apparent death in exchange for any information that she and her "partners" have gathered so far (we assume she's but an errand girl for some larger organization). She bade the party to return after 24 hours as she would have to confer with her group.

Highharvestide 1375 The party returned to Errya. She agreed to the party's terms as long as their claim to the northern section of the first level is respected. She provided maps of a few known sections of the first level, and of particular interest was the entrance to a sublevel called the Citadel of the Bloody Hand. The Citadel was once the hideout of the Shadow Thieves and currently occupied by the City Guard. It had great strategic value as there were three exits to the surface in addition to being a defensible underground redoubt.

As the party approached the stairway leading into the Citadel, they encountered a group of badly beaten City Guards who spoke of magical effects that defeated their unit and expelled them into the dungeon. Seth and Rokh healed their wounded, after which the soldiers provided directions on how to navigate the interior of the Citadel safely. Seth's shadows scouted ahead and reported that there were indeed three "huge spheres of lightning, fire, and another of unknown make" guarding sections of the sub-level.

Kiira and Rokh charged the first guardian, the electricity sphere, which was at the top of the stairway. The ceiling collapsed as they ran up, totally blocking the passage and separating them from the rest of the party. They easily defeated the electricity sphere in a couple of rounds. Seth attempted to remove the rubble with his lyre of building, to no effect. One of the guards informed them that that trap was merely an illusion, and the adventurers hung their heads in shame for falling for that stupid trick.

Anee informed the rest of the group that the sphere was a "living spell," a magic spell given life but no sentience, and possesses the characteristics of an ooze. The party assumed that these were the creation of Halaster himself and were now trying to reclaim the dungeon after their creator's demise.

Kiira and Rokh defeated the second and third guardians, the fire and sonic living spells, with no hassle. Then another one, a similarly Huge-sized sphere with an outer shell of webs, appeared with a retinue of several smaller-sized living spells. It blocked the party from going deeper into the Citadel, but otherwise did not attack. Keli and Anya, the party's arcane casters, felt a sense of familiarity from this particular living spell, as they believed that it had also appeared in their Halaster-induced visions. They touched its outer surface, and it gave them a soothing, tingling sensation.

Inside the web-shelled living spell was a glowing blue light. Rokh attempted to reach for it, but the light turned red. After much cajoling, Keli hesitantly agreed to reach inside a seemingly harmless but obviously powerful glowing sphere of magic. After realizing that she had not been suddenly annihilated, she felt inside the lightsource and found a small metal loop. Deducing that it was a ring, Keli grasped it firmly in excitement and felt that spikes surrounded the object. Immediately after retrieving the ring, the remaining living spheres herded everyone though one of the exits and into the city sewers.

The party was back on the surface. Rokh and Anee examined the ring and both deduced that it was a horned ring, an item created by Halaster. Further research revealed that it was a minor artifact, that only a handful were in existence; and most importantly, it allowed Halaster and his apprentices to teleport though Undermountain unhindered by his teleport cage. 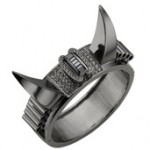 My fellow members of the Alliance of Daylight & Darkness, I cannot stress enough the importance of this horned ring. In Rokh's words, it's a game-changer.
Currently in our campaign, power groups are probably scrambling to carve out their own domains within Undermountain and claim its treasures, hindered primarily by their inability to travel freely between enclosed sections and levels. If these people find out that we have in our possession the key to Undermountain supremacy, well then, let's just say that we won't have any shortage of lethal random encounters.
We will keep the existence of the ring a secret. No one, not even our Clan Melairkyn patrons, should know (which could potentially be a treasonous act for Kiira). Ironically, our greatest enemy is the goddess of secrets herself. So...
I suggest that Keli and Rokh share possession of the ring. The two of you can only cast greater teleport once per day each, which means we can only travel unhindered through Undermountain twice a day. Also, it occupies no body slot so you can still wear your own rings.


Featured Image: Undermountain Map from Lords of Waterdeep: Scoundrels of Skullport board game by Wizards of the Coast
Image Credit: Crocs Noirs cuff in plated hermatite and black crystals from Mawi London


◄ Previous: The Alliance Reunited
► Next: Down the Shaft