5th day of Uktar 1375 After several days, Anee had finally unlocked all of the Runestone’s properties. She learned that it acts like a capacitor for spells that are cast inside Undermountain. Its charges are used to power some of the magical enhancements of the dungeons, such as Halaster’s teleport cage and scrying cage spells (although this particular use seems to be a recent development).

The group’s resident archivist also noted that its charges may eventually deplete if, for some reason, everyone in Undermountain stopped casting spells. And Anee was unsure if it could still be reactivated if it ever reached that point.

Halaster found the Runestone's ability to store and harness spell energy as a naturally-occurring phenomenon and has never seen it drained, so he decided to tap it power. That means that the Alliance must return at least once a month to check and drain it of its excess charges. A discharge drains it almost to the point that all of its stored spell power is depleted. And while at this state, the Runestone doesn’t have enough charges to replenish Undermountain’s enhancements.

The Runestone grants its controller the ability to activate or deactivate a portal, or reformat one for a single trip. The control panel can also be used to supplement the Runestone’s charges with arcane spell slots on a one-for-one basis (e.g., expend a prepared 9th-level wizard spell to replenish a dispelled teleport cage). And as far as the enhancements themselves are concerned, the control panel is also equipped with a sort-of feedback mechanism that tells the controller when a particular defense spell is down, in the same manner as when a known portal is presently active or not.

Unfortunately for the Alliance, Anee could find no means of deactivating or circumventing the Runestone Level’s guardians. They would be continuously replenished as long as the Runestone had charges, remain until destroyed, and worse, they would recognize only Halaster as their master.

Anee also noted that the Runestone is solely an arcane artifact and could not process divine spells. However, she does not believe that Shadow Weave energy, whether arcane or divine, has ever touched the Runestone.

At this point, Anee had deciphered everything that Halaster wrote down concerning the Runestone. The party decided to use it to close the few portals that they considered security risks: the secret Twisted Rune portal that they uncovered, the Shadowdoom portal at the bottom of the long staircase leading to an underground forest, and the second Shadowdoom portal at the top of a winding staircase leading to an upper level. Anya offered to expend three 6th-level spells to power the seal portal spell Anee used.

The group discussed their action plans as they were preparing to leave the Runestone Level after almost a month of research. Kiira, of course, would have to first report their findings to King Gyudd and seek advice from Bandaerl on how to better secure the Runestone. Then she, together with her bard cohort Kendor, would try to open diplomatic ties with the Lords of Waterdeep, given the significance of the find.

Rokh and Anee, with their ties to the Harpers, would try to find the adventuring party who rescued Halaster from the Twisted Rune. That group may be able to provide the Alliance with valuable information about the cabal, particularly on how they were able to breach Undermountain’s defenses.

They knew that they would have to finish their tasks quickly and return as soon as possible. Although they were confident that nobody else would be able to access the control panel without the control tiles and Anee’s extensive research on the subject, the group had no means of preventing anyone from entering or leaving the Runestone Level. 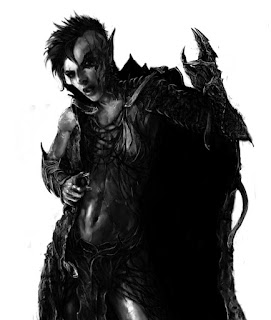 The party made the exact same preparations they made when they first entered the portal to the Runestone Level—Rokh and Kiira had no metal equipment save for a single weapon, and everyone else got into Rokh’s portable hole. And as Rokh stepped forward to activate the portal, he saw movement out of the corner of his eye and warned Kiira.

Two creatures stepped out of hiding, their figures hidden in cloaks. They assaulted Kiira from behind with their bare hands, both of which land, and both step back after the attack. Their cold touch inflicted 4 negative levels on the tough little dwarf cleric.

Rokh activated the portal and stepped through. The shadowdancers attempted to grapple the dwarf, but Kiira successfully landed an opportunity attack against one of her attackers.

Featured Image: Halaster Blackcloak on the cover of Waterdeep: Dungeon of the Mad Mage by Wizards of the Coast
Image Credit: Misshapen Elf Monk by thatDMan on DeviantArt

◄ Previous: The Search for the Breach
► Next: The Twisted Rune Sends Its Regards