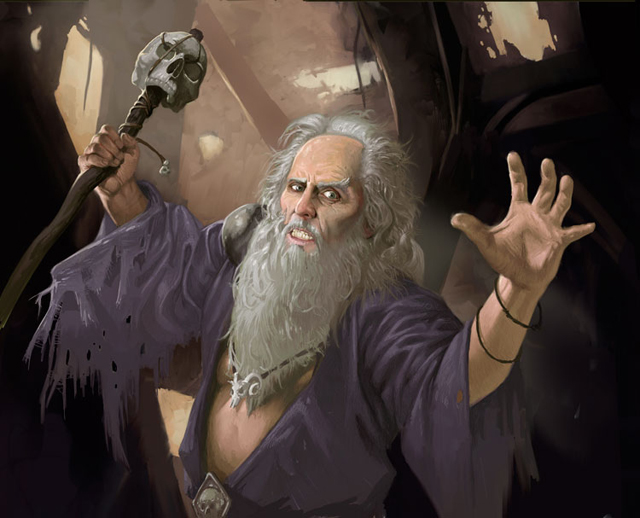 Still the 3rd day of Marpenoth 1375 The rest of the Alliance regrouped on the path below the caldera and prepared for their ascent. Keli piggybacked on Kiira; Kendor produced two greater floating disks through his shadow conjuration spell, he rode one and had Rokh and Anee ride on the other disk (and warned them not to disbelieve to illusion or they'd fall).

On the way up, Keli spotted the drow—three with dragon wings, hovering near a fourth one who was still hanging onto the steep hillside while being attacked by Seth's shadows. She cast finger of death on the one still grounded and instantly killed it, and arc of lightning on two of the flyers. The flying drow immediately dispersed in different directions.

The party flew up to the hilltop to face the Huge creature sitting on top of Anya's resilient sphere. They saw a 12-foot monster made of stone with crystals jutting out from its body. According to Anee, it was a unique kind of stone golem, one that possessed the abilities of an earth elemental, and probably Halaster's most powerful guardian on this level. Keli cast a disintegrate spell on the golem but it was blocked by a ward. The group decided to go after the drow instead and face the monster later.

Rokh, Anee and Kendor pursued one of the wounded drow and the Tymoran killed it with a searing light spell, and the other was chased down by Keli and Kiira, and the Shade killed it with another finger of death. As the second dark elf fell more than 100 feet to the cavern floor, the third swooped down to her companion; Keli and Kiira caught up to the drow and saw her retrieving a satchel from the corpse. Keli slew the third drow with (you guessed it) finger of death.

The group retrieved the dark elves' belongings after 5 minutes of thorough searching, including the mysterious satchel which contained small tiles with etched runes (they would later realize that the tiles fit the control panel on the caldera). Then they flew back up the hill to engage the earth elemental/stone golem guardian. 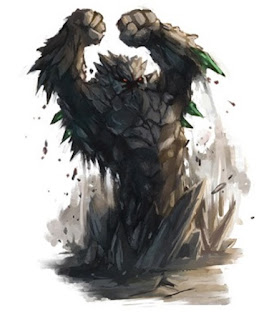 Rokh and Anee flew onto the caldera first but the aasimar cleric missed his attack. Then Kiira air walk-ed in, dropped Keli near the edge, and hit the rock monster squarely with her screaming warhammer. Keli attempted to cast another disintegrate but it was somehow counterspelled. Both Rokh and Kiira were able to deal lots of damage to the golem with their adamantine weapons, but the golem in return also dealt deadly attacks with its rocky fists. With a couple of much-needed healing spells from Anee, the two clerics were able to defeat the stone golem after a few rounds.

Reunited, the group investigated the satchel of tiles and the control panel. There were 36 tiles, each one bore a distinctive rune; and all around the control panel were 24 slots for the tiles, plus 6 cylindrical slots of different sizes that had no obvious purpose. Even with their bardic knowledge abilities, Seth, Rokh and Anee could not determine the nature of the runes [each one rolled 23 on their checks—a feat of probability]; but Kendor, the real bard of the group, had surmised that they were not of any known language, magical or otherwise, and truly unique.

They descended the path around the hill and investigated the caves. They found three shallow caves filled with runic writing on the walls, and Halaster had left nasty exploding glyph traps in each cave. After Keli dispelled the glyphs, Anee proceeded to study the seemingly random and direction-less scribbles. She estimated that it would take her a full day to study each cave in order to decipher Halaster's code.

The company made camp inside the uppermost cave.

4th day of Marpenoth 1375 The company was attacked by three flameskulls. They were easily dispatched by Keli's disintegrate but not before nearly killing the two female cohorts inside the cave, Anya and Anee. In order to protect themselves from further surprise attacks and maintain Anee's focus on her research, Anya sealed themselves, along with Kendor, inside the cave with a wall of stone while the rest stood guard outside along the path.

With time on her hands, Anya resumed her identification of the magic items they had found.

Meanwhile, Rokh found the corpse of the first drow that Keli had killed the previous day. His true seeing spell revealed that the creature was actually an aranea—an intelligent race of spider-like creatures that could shapeshift. Rokh figured he might as well ask the dead creature some questions on the next day, before the body decomposed further.

Three more flameskulls attacked later that day. Keli disintegrated one but the other two flew away after Rokh inflicted some serious damage with a flame strike.

5th day of Marpenoth 1375 The company moved to the second cave and the entire day was otherwise uneventful. Anya studied her new spellbooks and Anee thoroughly scrutinized Halaster's madness-induced writings.

6th day of Marpenoth 1375 The flameskulls returned en force. There were six of them this time but were still more like a nuisance than a real threat to the player-characters. Keli chased them down using her shadowstride ability and disintegrated them one by one while the rest of the PCs sat back and watched.

Rokh cast a speak with dead spell on the aranea corpse. Not much information was gleaned from the creature's answers, but the drow researchers were apparently not affiliated with any outside group but their own house, and they did not get very far with their research. The party then moved to the lowermost cave.

While scouting around the cavern, Seth's shadows found no living creatures but there was a large pile of humanoid bones on the far side. Rokh deduced that it must be where all the flameskulls were being spontaneously spawned by Halaster's magicks. They flew over to the bonepile and smashed each skull to bits.

7th day of Marpenoth 1375 Anee was now ready to present her findings.

The writings told of a story that, sometime in the past, Halaster detected something dangerous for/to Undermountain and, naturally, sought a means to keep his domain safe from whatever it was. He laid multiple magical traps and made the place easily defensible, but it was not enough.

One area of Undermountain was unique—it was inaccessible to teleportation and contained a power source, which Halaster called the Runestone, that he could link to other areas of the dungeon. He learned how he could control its flow of energy by using the rune-etched tiles, direct its effect, and distribute it to other levels.

However, the Runestone was unstable; if not regularly maintained, it could explode.

And so, once a month, the Mad Mage had to expend the Runestone's potential energy by repairing a teleport cage, reformatting portals, and the like. He could also use it to recharge magic items.

Halaster's goal before his unexpected demise was to use this energy to power epic-level spells as well. How far he was able to take this part of his research was unknown, but it was most likely what caused his death. (But it should be noted that, according to Fidelio, something had interrupted Halaster's casting that resulted in a deadly explosion.)

At this point, the group was still uncertain on how to use the runetiles and the control panel even after Anee's lengthy exposition. She needed more time to study everything, so the company will be spending a few more days of downtime while the archivist does her thing.

Meanwhile, Keli has noted how sturdy and comfortable her new deuter bag of holding is, and would like to thank her drow sponsors for providing her with such a wonderful product. deuter bags are available at most sporting goods stores Faerûn-wide.


Featured Image: Halaster Blackcloak from Lords of Waterdeep: Scoundrels of Skullport board game by Wizards of the Coast
Image Credit: earth elemental from Pathfinder Society: The Cosmic Captive by Paizo